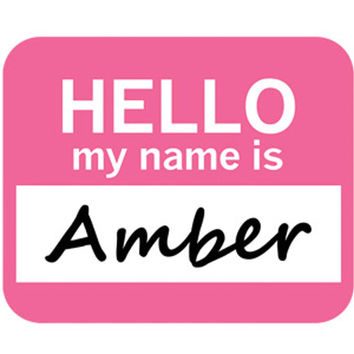 My first name is Amber.  Many people tell me that the name is fitting for me especially given that my hair is golden-red.  However, I am not exactly a fan of the name.  I’ve never understood until recently why I dislike my name so much other than the fact that hearing it literally makes my ears buzz and ring.

I’m sure that I am not completely aware of all of the reasons that I loathe my birth name but through my (C)PTSD recovery journey I have begun to recognize that my name conjures up horrific memories from my abusive childhood.  I mistakenly confided this vulnerable information with abuser M when we had first met and I now realize that he immediately seized the moment as a way to take control of me… through my name.

Abuser M instantly took advantage of my vulnerability and suggested that he give me a “pet-name” that only he could call me.  That sounded rather nice to me over repeatedly hearing him call me the name that makes my ears ring.  And so he gave me the first pet-name that I acquired while under his control.  He dubbed me “slutpet”.

He called me my new pet-name lovingly.  I now see the contradiction as a simple oxymoron and one way of many for abuser M to take control of me mentally.  Abuser M created a heart shaped pet tag encrusted with pretty pink swarovski crystals to display my new degrading pet-name for all to see.  The tag was engraved “SLUTPET If FOUND CALL SIR (###) ###-####”.  He attached the tag to a collar that he had obtained on Haight Street in San Francisco and gingerly clasped it on my neck.  I now see how forcing me to wear such a bold and clearly degrading sign on my neck was just another one of abuser M’s manipulative and calculated control tactics.

How original… but I grasped on to the degrading name because I wanted him to love me.  It is now horrifically sad for me to realize that I had prefered to be called slutpet over my birth name of Amber.  After I embraced my first pet-name I knew that I would take on whatever name abuser M would give me.  I now realize that abuser M further used  pet-names as a form of control over myself.

Of course abuser M called me cuntly as if it were an honor for me to wear his degrading name.  And yet again a custom collar was created for me that clearly spelled out my shameful pet-name CUNTLY.  Abuser M said that this collar was only for “play” and I would rarely have wear it outside.  However, he would often threaten to force me to wear the degrading collar in public as a form of punishment if I had “disobeyed” him in any way…I only wore it in public a few times but those few times were enough to realize that I did not like to disobey abuser M.

Another public pet-name that abuser M would frequently call me was “Red”. Yet again, I am uncertain when abuser M began calling me this name but I do know why.  It was my “professional” pet-name.  He believed it was acceptable for him to call me Red in professional situations such as business meetings, events, etc. I even had a personalized email address through his IT consulting business… red@abuserM.com.  Of course his slave, his pet had to also perform as a girlfriend and eventually fiance in public and professional situations.

I absolutely dislike the pet-name red. Why? Because the name reminds me of Galina Reznikov aka Red from the Netflix Series Orange Is the New Black.

After I told abuser M about loathing my birth name, there is only one instance that I can recall where he had called me Amber out loud in public.  The only time that he acknowledged who I really am by calling me by my name was in court where I had taken him at the end of our relationship to obtain a Domestic Violence Restraining Order.  In the court in front of a female judge, he clearly called me Amber. Of course he could not show his true self and call me the names he had always called me so “lovingly” such as slutpet, cunlty, c-ree, or red in front of a female judge.  It almost didn’t even sound real, like I had never heard my name come out of his mouth ever before.  The sound of abuser M saying “Amber” out loud was almost a shock and a blow to my ears… because my name does after all bring up horrific flashbacks.

On the bright side of all of this – because of the abuse that I endured I now have the opportunity to confidentially and legally change my full name to whatever my heart desires. I already have the name picked out but I want to sit with it for a while before I finalize my decision.  It is quite exciting for me to take this opportunity, it will be a chance to renew my sense of self and to become who I want to become without any inhibitions.  I like to tell people that I am simply upgrading my name.  I cannot wait for the day that I am able to accomplish this important step in my recovery.  It gives me something to look forward to, almost as if I have a new future ahead of me.

What’s Done is Done (Past Posts)